Was That a Pair of Bald Eagles?

I often find the best picture opportunities happen when I don’t have my camera. That was exactly the case yesterday when I swore I saw a bald eagle fly right by the condo as I stood on the 19th floor. I tried to follow it as it passed by but the corner of the building obstructed my view. To add insult to injury, the pelicans were out in force and I could have touched them as they flew by the patio railings.

Today, I was determined to be prepared and brought my smaller point and shoot with me to work. I was hosing down a patio when I thought I saw to white headed birds on a nearby dock roof.

Instantly, I became excited at the thought of seeing two bald eagles! I don’t see very well at a distance and continued my work while trying to determine if they were indeed bald eagles. I felt pretty certain they were and decided to get my camera and hoped they wouldn’t fly off in the meantime.

As luck would have it…they were still there. I wished I had brought my other camera with the 1000 mm zoom. I could see them better, but not very clearly.

I decided to try different locations and even walked out to the edge of the river. It was then that I saw the bird that looked like it was flying had a metal bar that ran to the roof. They were fakes! 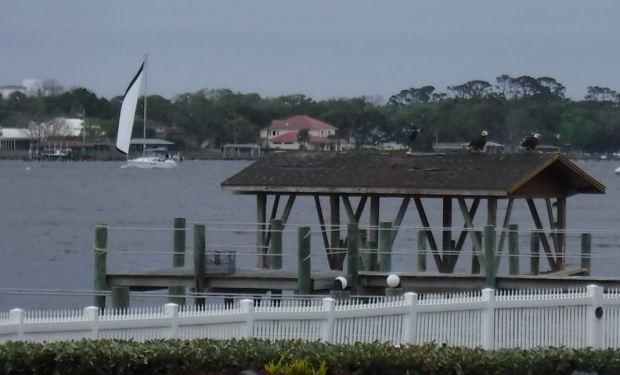 Disappointed, I continued my work and was wrapping up cleaning another area of the patio and decided to take one last look…they were gone! 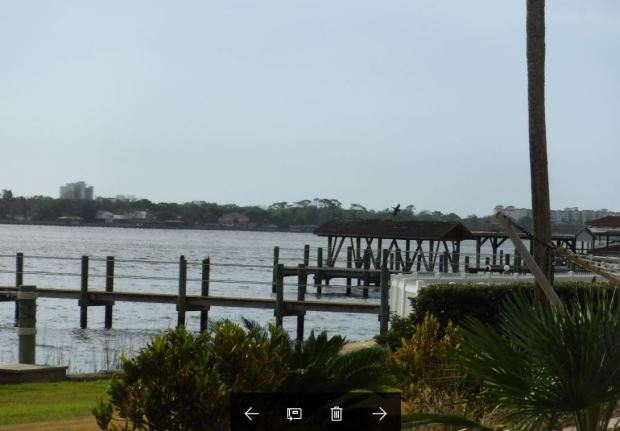 They were BALD EAGLES…and a pair at that! It was only a little over a month ago that I saw my first one…now it seems I am seeing them everywhere! It’s really wonderful to see our national bird…a bird that was endangered for most of my life…coming back with a force! Yes, it was and AWESOME day!

When I got home, I downloaded the photos and seeing them enlarged, you can clearly that the third image shows the bird on the left is turned and looking in my direction. 😀 😀

← Calling All Writer’s
Tips from a friend… →

17 thoughts on “Was That a Pair of Bald Eagles?”