We are currently waiting on some info from contractors so that we can submit our permit for the main part of our rehab project so I thought I’d update a bit more on some of the completed aspects. This post is about getting electricity.

Because of the meter box tampering from the earlier owners, the power company didn’t just shut off the power, they cut the line at the pole. The line is still there and runs from the pole, across the drive and anchors to the front corner of the house right above the house numbers. In this picture, you cannot see the dangling wires because the long tree limbs are hiding them. Needless to say this makes a horrible first impression and has zero curb appeal. 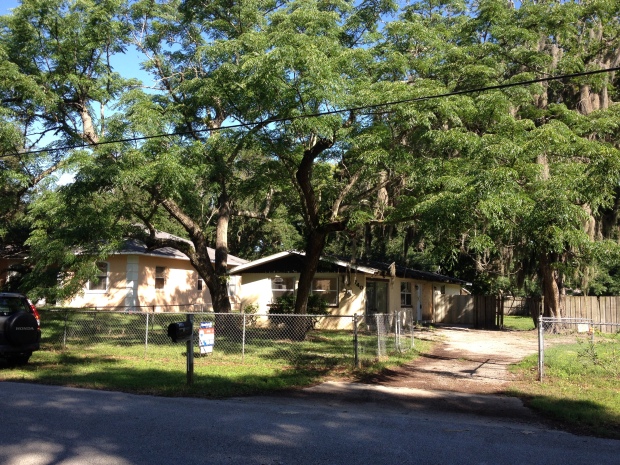 Right next to the house numbers are the meter and telephone boxes. Did no one think of aesthetics when doing installations? If you look carefully you can see the power line covered in moss. 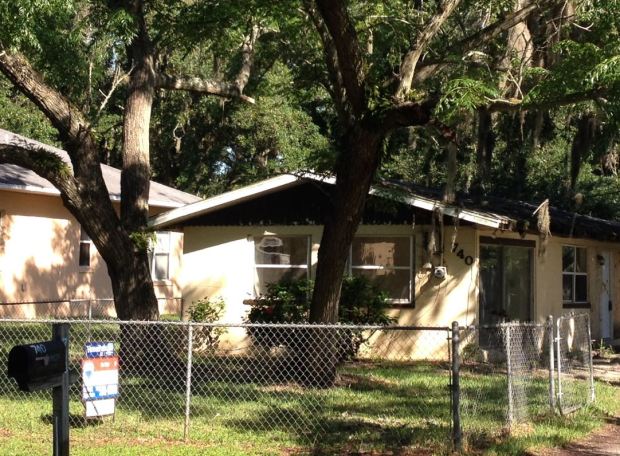 Not only was this an eye sore, it was problematic for the guy who brought in the demo dumpster. He kept getting tangled in the line trying to drop off the dumpster. The tree guys knew what to do and pulled the line away just like they did in this picture.  I’d already decided that the line was coming down once the trees were cut…we were going underground! 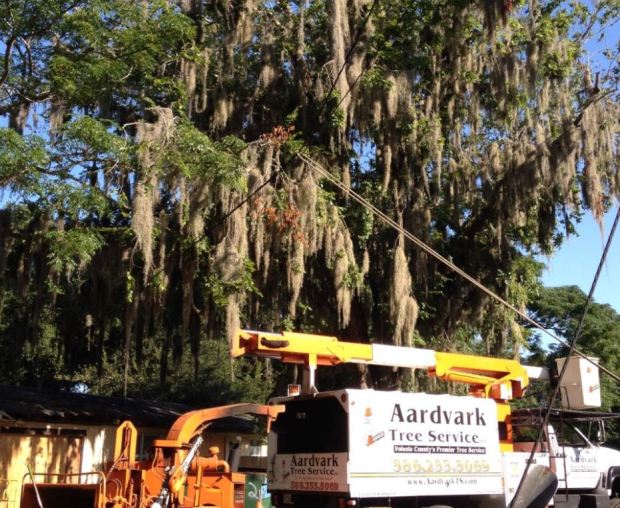 With no tree limbs to keep it hidden, the line was in plain sight. 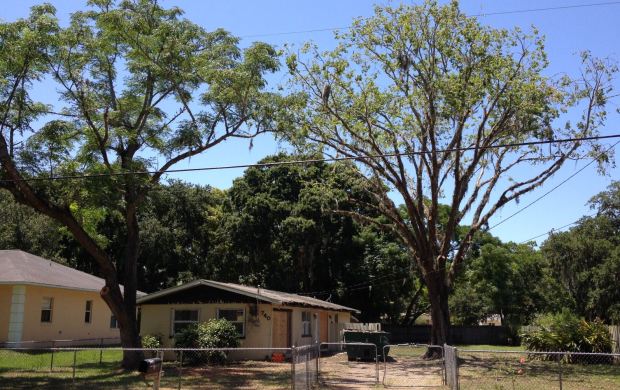 A couple of young guys arrived to do the underground. They were willing but not particularly knowledgeable in trenching or running the machine. 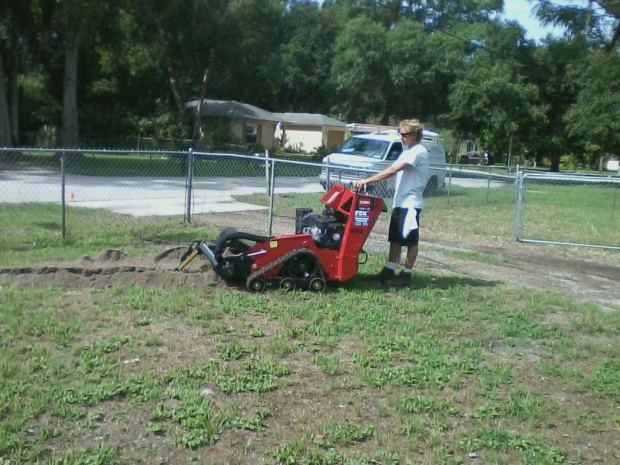 They started at the pole, working their way forward but hit concrete near the driveway. They sat and scratched their heads for a while wondering what to do. Rick decided to give them a hand, went into the house and came out with his demo drill, broke up the concrete and showed them how to dig it out. A little further down, the guy running the trencher ran it aground and got it stuck. These two were a bit short on problem solving skills so Rick came to the rescue once more and showed them how to use levers to un-stick it. Lucky for these two, Rick likes to supervise people working on the house. 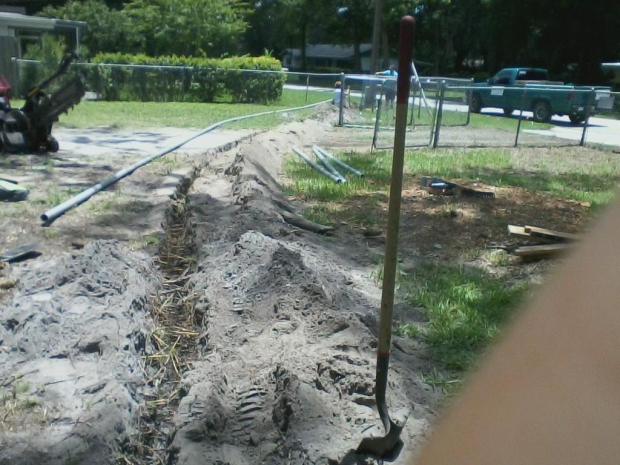 The pipe is threaded and ready to be buried. 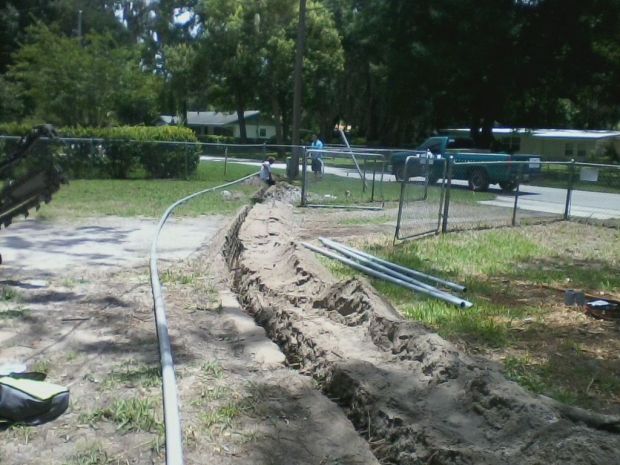 It looks so much nicer on the left. Soon we’ll get all that phone stuff taken down and it will look even better. 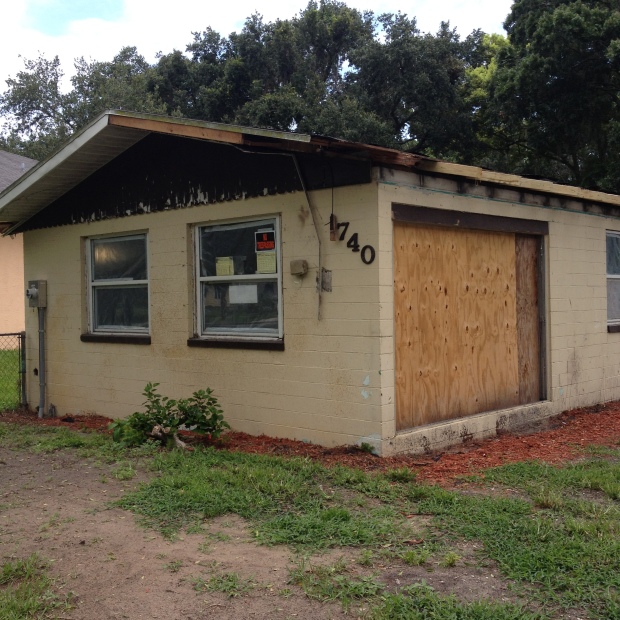 Sadly it did not pass inspection the first time. I happened to be at the house the next morning and saw the owner of the company coming to inspecting the ground rods. Apparently he didn’t measure when he did it because they were 2 inches short of minimum code. A rookie mistake which would have made any New York electrician the butt of jokes for weeks.

We were taken aback when the owner became indignant over the failed inspection, he felt the inspector was being too picky. From our standpoint, code is code and his work was not to code. We had done our research and thought we picked out a good one. Granted he was way better than most but Florida contractors don’t have the same standard of professionalism as other parts of the US, especially those from New York which is one of the reasons Rick supervises all the work done by subcontractors. 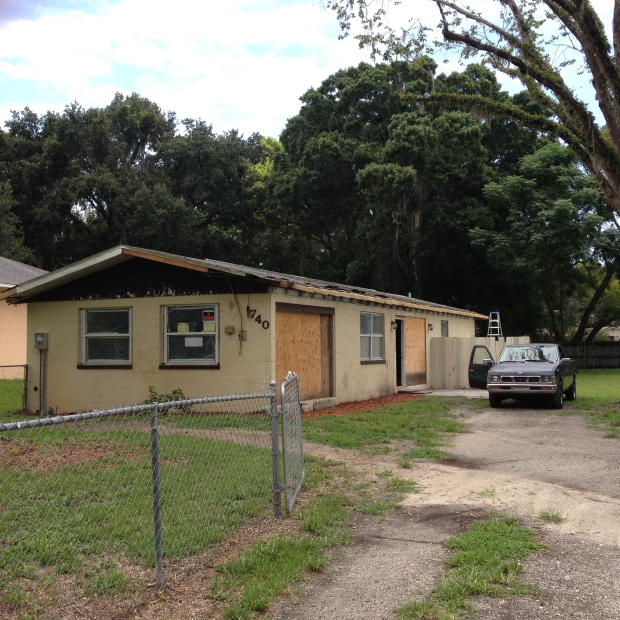 Already it has a better curb appeal…not much but we’ll take better any chance we get. You can see Rick has been working on the rafter tails which look great. Soon we’ll have a new roof.

Best of all…we have electricity! No more generators…and we can hear the birds now, when we work.

← House Project – I Think I Married a Super Hero!
Bloggers Unite for Peace →