For some reason or other I have run into technical problems when trying to write my next post. My computer went kaput and while researching what my next purchase would be I was temporarily using my Chromebook which is a different format and operating system than I am used to using. While I struggled to figure out how to get pictures from my iPhone to that computer I spent more time running in circles than getting anything done. I hate wasted time! Grrr. And then out of the blue, my old computer started working again! YAY!!!

It’s been a while since I posted the hideous photos of our project house and we have not run off screaming, “What did we get ourselves into?” nor are we pulling our hair out. We have indeed made progress but I find the increased work schedule and the delays in reporting what we have been up to has made a single update a bit too long for one post…so, I’ll be filling in the void over the next few posts.

The day following our closing I scheduled a tree service to come out and prune the trees. Before we could replace the roof the trees would need some serious haircuts. After all, they were the reason the roof was in such bad shape.  Rotted leaves, branches and moss left for years without maintenance.

The left tree below, a chinaberry, was trimmed. The center one, also a chinaberry was removed as it was precariously leaning toward the power lines with many of its roots exposed above ground and the tree on the right, an elm was heavily pruned with as much of the moss removed as possible. This beautiful tree had been so neglected that it was in poor condition. We are hoping to rehabilitate it over the next few years.

There is also the tree growing into the back corner of the roof which will also be removed. Fortunately it has not affected the structure at all. 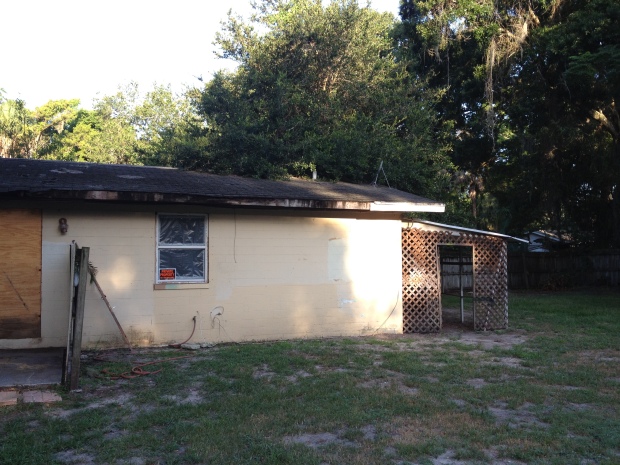 I just love the name of the company that did our work. This being our first subcontractor, I wanted to be there while they did the work. I brought books and a laptop figuring I would be bored out of my mind. On the contrary. The work was fascinating, the crew phenomenal and I had a blast doing the photography. Yes, I am in charge of keeping documentary records of this project! 😀 😀

Our tree climber was very experienced and moved through the limbs with ease. 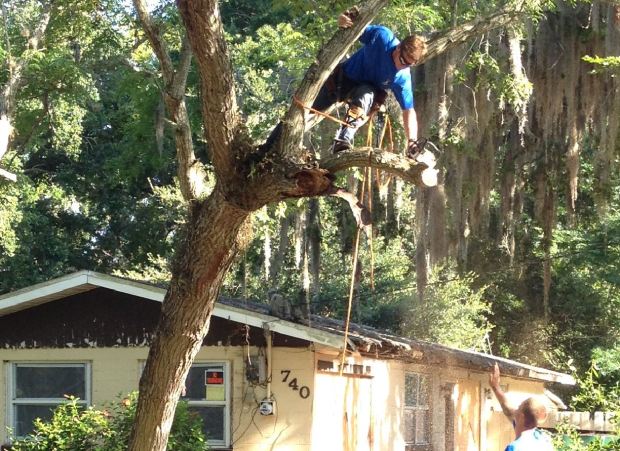 One of the nicest parts of this day was watching the crew work together. They were well practiced, each knew his part of the job and attended to it without any prompting or communication from the others…they really had a Zen like quality as the worked…and boy, did they hustle!

One poor bird (look closely, he’s in the wire fence just left of the rake) was so distraught over the tree coming down, flitting from one part of the fence to the next watching as each branch came crashing down. I imagined him crying, “My babies! My babies!. What have you done to my babies?” I shudder to think that I have murdered a family of birds in my effort to clean up the place.

There goes the tree that had been encroaching onto the roof!

Suddenly the back of the house looked naked! As unbelievable as it may be, that rickety looking structure is described as an the unfinished patio. Someone must have the spiked assessors coffee that morning…because that certainly is no patio. 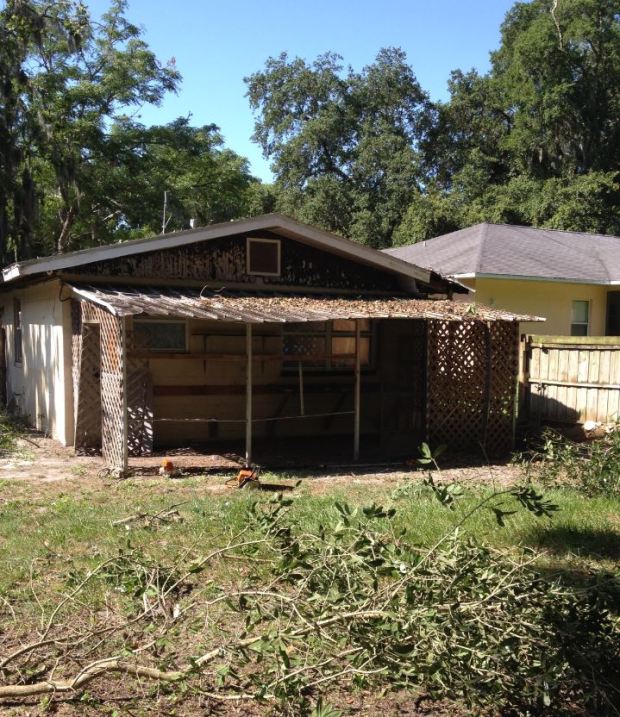 Did I mention that they really hustled! This guy, a newbie was by far the best and ran almost non stop.

Watching the stump grinder was really interesting…the blade conjured up visions of horror movies. What dastardly deeds could be done with a large blade on a motor…imagine sound effects from the movie Psycho! 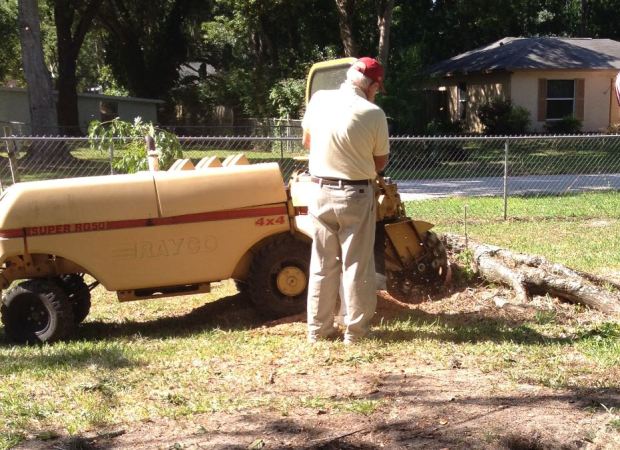 A harness put to good use was set aside…

while the climber set about trimming the elm in the bucket truck.

By the end, the trees looked like they’d been given a buzz cut and the place looked brighter than ever…except now the whole neighborhood could now see the eyesore of a house that had once been hidden by the trees. We also lost all of our beautiful shade. It was hard to cut them back so far but we knew that they would keep dropping their tired branches if we didn’t. Hopefully by next year they will have regain some of the vigor they once had.

The next project is the roof. Rick wanted to do the roof himself but I forbade him. He ruined his knees doing a roof years ago and already has some pain from that…there was no way I was risking further pain and injury. We were going to hire roofers to do the job!

← When I’m Gone
House Project – I Think I Married a Super Hero! →

21 thoughts on “House Project – Sometimes a Tree Must Fall”