Since St. Patrick’s Day is just around the corner, I thought I’d do a bit more research on my Irish roots to see if I could find my exact Irish connection.
I have two – one on the maternal side and one on the paternal side but a bit more distantly removed. Though I was not able to get any further on the lineage, I found myself becoming fascinated with the geographical/political history and the resulting influence it had on its people, specifically…my people. We’ll begin with my great grandfather 4 times removed who was reportedly born in Antrim, Ireland in 1771.

A bit of back story, In the early 1600s at the close of the Nine Years’ War in which the English were steadily expanding into Ireland, the leading families of Northern Ireland surrendered to the English thus ending the war. Soon the Protestant English were trying to enforce their theologies on the primarily Catholic Northern Irish. And the Irish weren’t buying it. The war had also devastated much of Ireland’s land and it’s population. What structures had existed were now rubble.

King James of England promoted migrating the neighboring Scots in to Northern Ireland (called Ulster back then) to increase population and economic recovery. He lured them with land and long land leases which they could not get in their own country. Jame’s real reason was to introduce a large number of Protestants to the area in order to influence and change the region from Catholic to Protestant. The Scots were great adventurers seeing the fertile land they accepted the challenge of sheltering in the ruins and fighting wild animals that had invaded the area and gradually worked the land and developed the community.
The Monarchy also encouraged English migration, basically stealing all the land from the Irish and giving it to the Royalist English along with the power that came as a landlord. Landlords who would in turn supply revenue to England in return for military force. The English were also Protestant but not like the severe Puritan Scots. All in all it is estimated that 100,000 Scots and 20,000 English migrated to Northern Ireland.

The Scots maintained their cultural beliefs and connections with Scotland, sending their children back home for

education and marriage, not intermixing with the Irish or the English. But they were hated by the Catholic Irish for taking their land and the English persecuted them for their religious belief.
About 1641 the Irish had had enough of the pillaging from the English and Scottish immigrants and went into a full revolt. As a result of that war, Ireland was left devastated and the Scots had either died in battle or gone back to Scotland for safety. Ireland found itself once again depopulated. A plea for immigration was set out anew with promises of twenty year land leases. And by 1700 another 50,000 Scots immigrated to Ireland and would eventually be known as the Scots-Irish, a term only used in America. Growing up, I remember my grandfather telling me that we were Scots-Irish. I had always thought it was a mixed breed rather than a group of Scots who immigrated to Ireland.

For a few years all was well in Northern Ireland and everyone tolerated each other. That changed in 1704 when the current monarch Queen Anne passed an act requiring all office holders to take communion in the Church of England. Suddenly all of the Scots who held office were unable to work. The Scots had fought off religious intolerance before, they’d do it again…they were stubborn people. But shortly after that and compounding the religious discrimination was the ending of the twenty year leases which expired in 1710. New leases were denied unless they paid exorbitant lease increases. It was the increase in land leases, not the religious attacks as we have been led to believe in our American History lessons, which broke the camels back.

Thousands of Scots-Irish left Ireland for America between 1700 and 1750. Once again, for a brief period things in Ireland went back to normal but within 20 years the English were back at it and raising lease rates. By the start of the American revolution 30,000 more Scots-Irish migrated to America and joined the nearly 200,000 who were already there. Of those who left Ireland for America, the majority were Protestant, the English and the Catholics rarely left and there were actually laws deterring Catholics from being able to leave.. As these new settlers to America arrived they were called Irish to which the Scots stated they were not Irish but Scottish which confused everyone because they had come from Ireland…thus came the term Scots-Irish. Having lived most of their life in the ravages of Ireland post war time they made excellent frontiersmen, traveling to the western parts of Pennsylvania, Virginia and Carolina. And by the time they came to America the hated everything English and embraced fighting in the Revolution though some had scarcely arrived.

My family took up roots in the western Pennsylvania frontier and settled in a town called Twolick in Green Township. One of the barriers to living on the frontier is that church services were rare if at all. The Protestant church had traveling ministers who would go from town to town performing marriages, funerals and christenings in addition to holding service for the town. The frontier towns got tired of not being able to have regular church services and turned to the Baptist and Methodist religions because they had far less strict educational requirements for ministerial training. The Protestants required six years of training whereas the other religions only required a calling and an ability to quote scriptures. It wasn’t unusual for the minister to lack reading skills…but that didn’t matter as long as he had memorized the passages and could preach them to the parishioners, he was acceptable. So it was in my family, lacking any nearby church they provided their home for the purposes of church services for The Twolick Baptist Church – the first church of Indiana County, Pennsylvania. 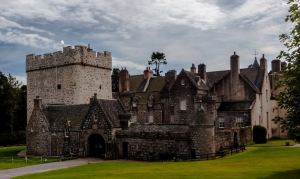 Though I found out that my Irish lineage was really Scottish, all this research did net me one important document. It was the discovery of my four times removed great grandmother’s christening in Scotland. She was the daughter of Lord Drum of Perth and was born in the castle. Without having her father’s given name it has taken considerable work to locate her birth documents, so I am very pleased about this. I have always thought it was really cool to have a relative who lived in a castle that still stands today. One day, I must go see it.
I will take up my maternal Irish roots in my next post but before I end of, I thought it appropriate to share a short history of St. Patrick himself.

14 thoughts on “My Irish Roots”