The Library of Congress opened in 1897, over a hundred years ago.  In that time we have had two world wars, conquered flight, sent a man to the moon and entered the computer age.  The amount of work since that time has been astronomical, far greater than Spofford could even imagine and by the late 1970s the library was showing its age, no longer the showcase that it had been at the turn of the century.

I’ve included a few quotes from the Library of Congress Information Sheets to illustrate the condition of the library by the 1970s and to reveal some of the renovation details.  The whole article is excellent if you want to read it, you can click here.

“Today, it is difficult, when touring the Thomas Jefferson Building, once the largest and most costly library building in the world, to picture the problems that came to characterize it in the decades after its opening, as it became increasingly overcrowded by constantly growing staff and collections. By the 1970s elaborately decorated spaces were subdivided by partitions, and dropped ceilings concealed the murals above them. Offices filled corridors, corner pavilions and the second-floor galleries of the Great Hall, compromising the beauty and integrity of the building. Its restoration was made possible by the 1980 opening of the third library building, the James Madison Memorial Building, to which some staff, collections and services could be moved.”

First they needed to update all plumbing, electrical and safety features to bring them up to the current code.  Then they added the electronic and security features.  All the work was done so that it would be invisible to the tourists coming into the library.  Carpet squares had been placed over the floors and mosaic tiles.  These were ripped up and the marble floors were restored.  All of this work had to be carefully coordinated as the staff and activities of the Library of Congress were still taking place in the building.

“Restoration of architectural surfaces, decorative painting and murals was based on historical research and archival photographs as well as on sampling of paint layers. The decorative painters cleaned and repainted intricate plaster reliefs and moldings. They cleaned gold leaf and, in some cases, replicated the aluminum leaf toned to look like gold or copper. They also re-created intricate painted classical patterns and designs. The goal of the mural conservators was to uncover and preserve as much as possible the original work of 19 artists, each of whom used different materials and techniques. No two cycles of murals presented exactly the same problems. Many were black with grime and soot or covered with yellowed coatings. Some were flaking, others were damaged by abrasion or leaks, and a few had been repainted.”

As we continue our tour of the library, keep in mind that this is the section that had the partitions, drop ceiling and carpet squares.  The work speaks for itself and much will be explained through the captions on the pictures.

East Stairway to the Second Level and the Reading Room balcony.

Ceiling work above the stairway.

A mosaic of Minerva greets you at the top of the stairs.  The photo does not show you the brilliance and dazzle of this piece.  She is completely breathtaking and awe inspiring.

But, here you can see a hint of what I am speaking of. 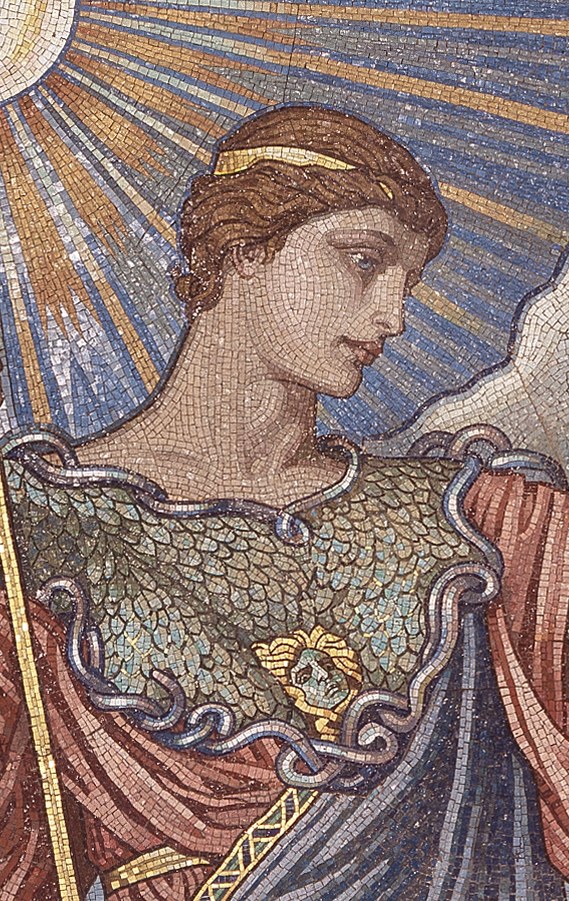 On either side of Minerva is the entrance to the Reading Room balcony.  The Reading Room underwent massive restoration and officially reopened in 1997.  Public may use the Reading Room but they may not remove any materials from the building.  Also, if you want something, you sit at a table, send a request and the material is brought to you.

Windows and statues in the reading room.

Between each arched window in the Reading Room is a female statue and on either side of her is a reknown male counterpart for that subject. 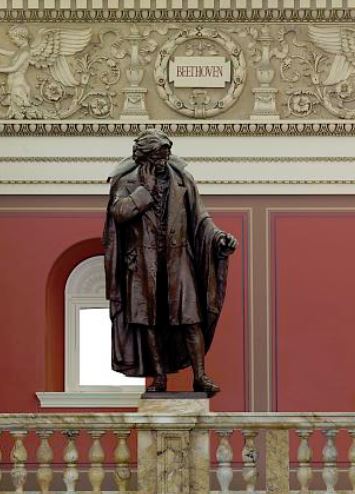 Each category above has two men renowned for their accomplishments in that field.  This one of Beethoven represents Art.

As you exit the Reading Room balcony you can see most of the Second Level, westward view. 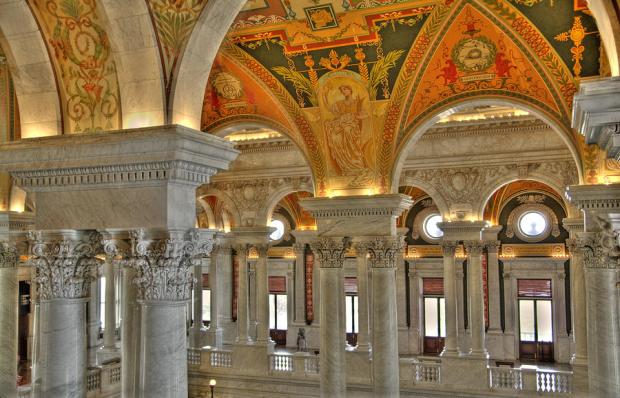 Closer look at some of the columns.

A collage of some of the artistic details that can be found throughout the library, created by Jeanne Selep.

One of four paintings representing each genre in literature. This one is Tragedy.

At the end of the hall is a window facing west. This picture shows the Capitol at sunrise.

As you walk along the various corridors you will read many inspirational quotes that have to do with knowledge and learning.  When the decision had been made to create a “cultural monument” it was decided that Spofford, the librarian who had initiated the building in the late 1800s, should be the one to choose which quotes adorned the building.  He also chose the male and female statues that surround the Reading Room walls. 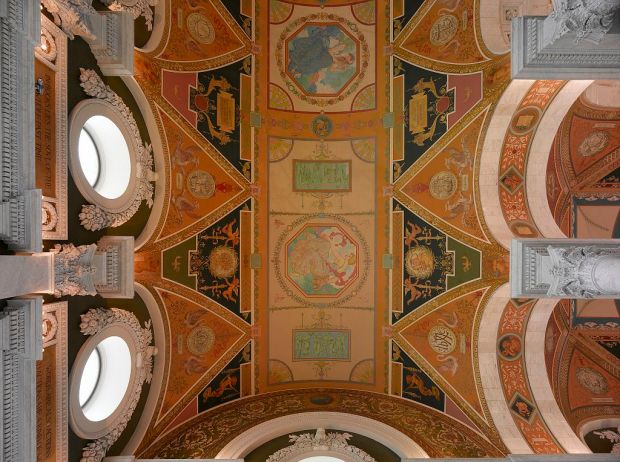 Ceiling of the North Corridor. 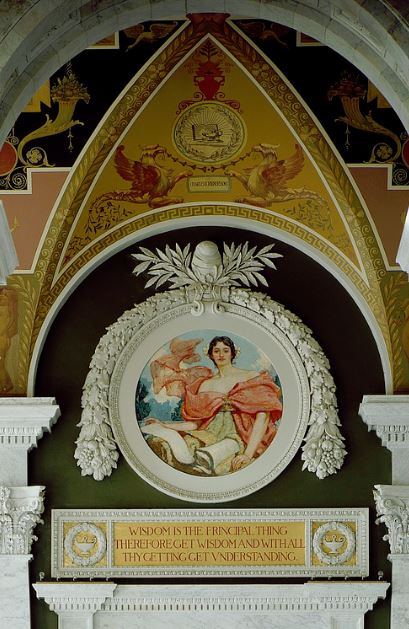 And this one is Wisdom

Much of the West Corridor is dedicated to Mathematics and Science. This is the Mural of Archaeology.

It seems that someone during the “embellishments” phase had a sense of humor.  I don’t know where this painting is located but it is a picture of the earlier Library of Congress when it was in the Capitol building. 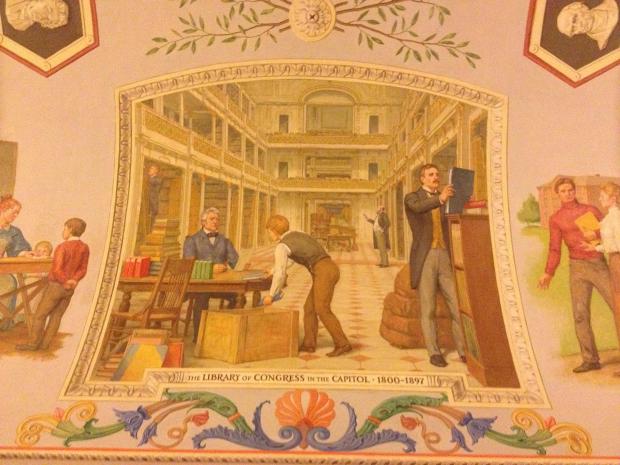 I must have stayed for five or six hours, stopping at the gift store on my way out.  My feet hurt but my mind was still in a state of awe.  In fact, I loved this place so much that every time I had a friend or loved one come to Washington DC, I personally brought them to the Library of Congress.

Resting my feet at the end of my second visit, perched on a wall at the entrance to the Library of Congress with the Capitol behind me.